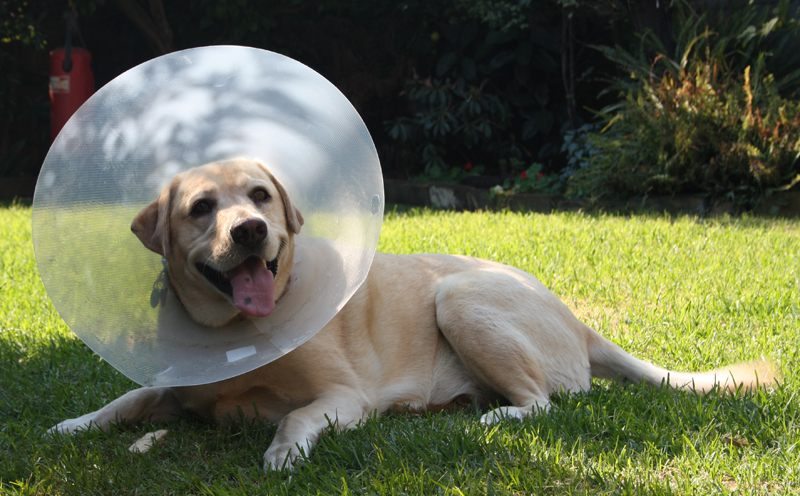 You may not realize it, but pets have a post-surgical complication rate that’s far higher than for humans. And it makes sense if you think about it. After all, pets are NOT likely to slow down and take it easy after surgery unless we MAKE them. They also have a thing about licking any wound into proper submission, and we all know what that means: infection, infection, infection!

I’ve had pets get around their E-collars and their T-shirts in a desperate attempt to consume their stitches. I’ve had dogs bounce around their crates until their wounds reopened from all the stress and strain. And I’ve had mama cats somehow find their way back to their kittens after being spayed (a recipe for premature suture removal). One of my colleagues even awoke to a midnight emergency in which a dog had consumed several lengths of his own intestines by way of keeping his wound “clean.”

Sometimes it even happens for no apparent reason at all. (“I SWEAR she didn’t lick at it.”) Pets are just like that. If they took their doctor’s advice to take it easy, incision site madness would not happen to the tune it does. But then, try telling that to your excitable Italian greyhound who’s as likely to jump straight up in the air as look at you.

It almost seems as if the problem is made worse by our modern anesthetic protocols and sophisticated pain-relieving abilities. No longer do our pets slump in the corner and sleep it off for a couple of after surgery. Instead, they’re up an wagging, bouncing, doing all the things pets should do––except when they’re fresh out of surgery.

But no, we’re not about to forgo pain relief and zonk them silly with drugs just so we can keep them controlled. So what’s a pet owner to do? Here are my top 10 suggestions:

*1. *Tell your vet about your pet’s propensity for post-surgical maniacal behavior (if you know about it ahead of time, that is). This way your vet can help you take extra steps to keep your pet safe.

*2. *Know the worst-case scenario (intestine consumption ranks high, for me) and avoid it to the best of your ability by being diligent about using an e-collar and a T-shirt and a bandage (if that’s what it takes).

*3. *Recognize that some pets will be great for some surgeries but not so much for others. A young, active dog will likely see more complications than an older, sedentary one. So after her spay as a pup, she might have more trouble recovering with perfection than for her mass removal surgery later on in life.

*4. *It’s a personality thing as much as it is an age thing for some pets. For example, given half a chance a Doberman will always make a mess of a suture site. Others? No sweat, regardless of the experience.

*5. *Keep checking the area. A smart pet owner uses common sense and knows that a red incision needs to be looked at before something really bad happens.

*6. *Don’t hesitate to go back to your vet’s for a re-check. Most veterinarians don’t charge for post-surgical follow-ups. It’s all included––as it should be. But do keep in mind that major problems (such as the need for re-suturing) is very rarely your doc’s fault. It’s probably not yours, either. Indeed, it’s more than likely just a common complication born of your pet’s individual circumstances. So don’t expect your vet to compensate you for your emergency hospital bill or underwrite intestinal surgery (as for my scary example, above).

*7. *Simple seromas (fluid blisters) under sutures are common for highly mobile pets. Though these will almost always resolve on their own, understand that it means you should be keeping your pet more quiet than you have been––to prevent any more fluid accumulation, infection or potential discomfort.

*8. *Antibiotics may be necessary, but sometimes simple Epsom salt soaks (applying hot, wet compresses to the area) works just great for many. Ask your vet about this option if the infection is very superficial and mild.

*9. *One great reason to get your pet crate trained is for just this kind of possibility. Crating is the surefire answer for keeping many pets “quiet.” Maybe it’s time you invested in one and started some basic training.

*10. *When all else fails: OK, I said no drugs to zonk them silly, but sometimes a solid stay at the vet’s IS required. I have to hospitalize at least one pet every few months because they won’t let their incisions alone––no matter what their owner tries. I’ve even been forced to sedate some of these pets when confinement and round-the-clock supervision proved insufficient. But it’s definitely NOT the norm.